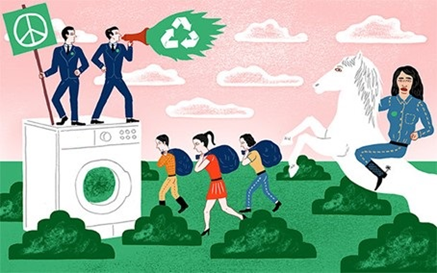 Only 2 % of all world’s plastic is recycled for the same or similar products. That means that even the worldwide recycling quote of just 14 % reflects not the recycling amount that stays in the loop. The majority of this plastics is downgraded to less complex outdoor products like benches or decks.

With other words, 98% of plastic packaging is currently being lost outside of the circular economy, going to landfill, being downgraded, being burned or being thrown into the environment. According to the Ellen MacArthur Foundation, 32% of plastic packaging ends up polluting our land and oceans as litter. We have tried recycling for decades with little success in place. More than 40 years after the launch of the first universal recycling symbol we couldn’t find a solution to one of the most serious problems for the planet.

Yet, the term recycling is being used more than ever, often highlighted as the silver bullet for the circular economy. Nothing could be further from the truth.

The limits of mechanical recycling

The complexity in material design that are optimized for performance and cost lead to difficulties in the recycling process. When most types of plastics are shredded, melted down and processed during mechanical recycling, they degrade in quality. Plastic is a big long molecule and if it gets chopped up in smaller pieces, or oxidized and chemically changed, then the properties won’t stay the same. Typically plastic can only be recycled a few times before it is too degraded to be used.

Contamination needs to be considered as well. The colors and additives used in making the plastics, as well as remains of goods are not removed in the mechanical recycling process. Most mechanically recycled plastics, therefore, can’t be used to make the same products – or any products in hygiene, food contact or other sensitive applications, such as toys.

One exception is PET (polyethylene terephthalate). As PET drink bottles are collected in a monostream, e.g. through bottle deposit systems, they can be recycled back into another drinking bottle. Recycled PET can also be used for other things, such as clothing and textiles, carpets or for roof insulation.

But for the overall types of plastics, recycling with our current system, will not be the answer to solve our plastic problem.

According to a recently published report from NPR and PBS Frontline, the American plastic industry pushed recycling for years knowing it would fall short. They sold the public on an idea it knew wouldn’t work — that the majority of plastic could be, and would be, recycled — all while making billions of dollars selling the world new plastic. The truth is, the plastic industry didn’t want recycling to work. Because if the job is to sell as much oil as you possibly can, any amount of recycled plastic is competition.

But even if the industry were to overcome the recycling barriers and finally scale up recycling, virgin-resource consumption might not decrease. This is partly because recycling itself requires water, energy, and chemicals. It is far from a zero-impact process.

The whole point, the only point, of reusing and recycling is so we make less new stuff. And that’s just not happening.

Rather, there is a risk of green-washing the term “recycling” that could blind consumers by its environmental impact. Besides creating new and separate markets for cheap secondhand products, like in the fashion industry, that don’t replace new products, it could dramatically increase the supply of recycled materials. This would put them in competition with virgin materials, driving the price of both down and the consumption of both up.

In this case, the circular economy is not replacing the linear economy; it’s just running parallel to it. In other words, circularity is being positioned as a way to drive new growth, not necessarily as a way to cut down on the use of raw materials. So far, there is no evidence that any of the large brands promoting recycling are actually using fewer virgin resources overall.

Trying to solve our environmental challenges by addressing the outcomes and effects, without addressing the underlying cause is like trying to fix a flat tire by pumping in more air without first closing the hole in the tire or as Albert Einstein has already emphasized:

“We can’t solve problems by using the same kind of thinking we used when we created them.”

The garbage that comes out of your house is just the tip of the iceberg. Even if we could recycle 100 % of our waste, it doesn‘t get to the core of the problem as 70 times more rubbish is created upfront when producing the things we consume afterwards.

The most impactful aspect of the original circular economy concept (cradle to cradle) is redesigning products and industries from the start to be nontoxic and regenerative, using as much renewable energy and biomass as possible along with safe chemicals and materials. Remaking new products from old ones and keeping them out of the landfill is only the final step in a completely transformed industrial process.