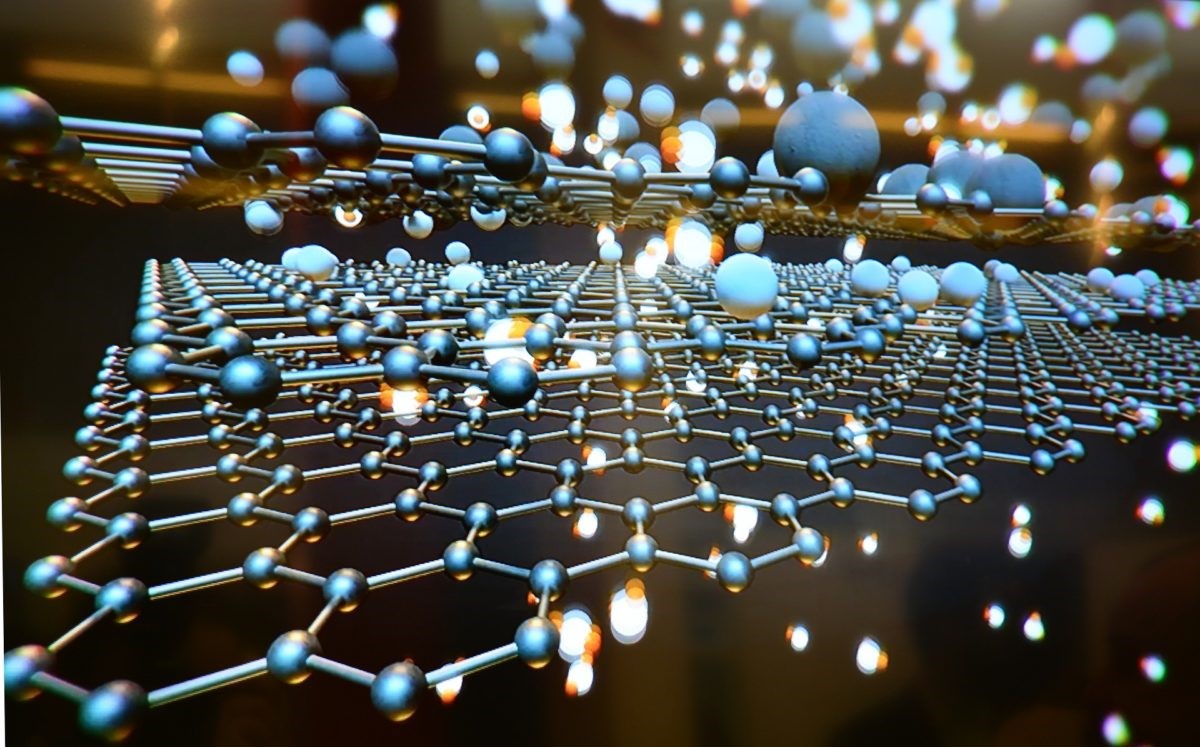 Nature’s simple palette results in products far more advanced than those produced by human industrial science. Seashells that are twice as tough as science’s best ceramics. Spiders can spin silk that is stronger than steel yet light enough to float on the wind. Nature suggests that the potential for inventive uses of easily recycled materials is huge.

One of the strongest and most fascinating materials in nature is carbon. With chemical and physical properties unlike any other element and just six protons in its nucleus, it’s the lightest abundant element capable of forming complex bonds. If the conditions are just right, carbon atoms can form a solid, ultra-hard structure known as a diamond.

Similar to carbon is graphene, a material that is made of a single layer (monolayer) of carbon atoms, tightly bound in a hexagonal honeycomb lattice.

Referred by many as the most revolutionary material in the 21st century, graphene has a special set of properties that sets it apart from other allotropes of carbon. In relation to its thickness, it is about 100 times stronger than the strongest steel. It is the strongest material known but also an extraordinary conductor of both heat and electricity and it is nearly 100% transparent to light.

In its basic structure, graphene is a single layer of graphite, also known as that soft material commonly found in pencil lead.

Anyone who has ever had a pencil lead snap on them may have a hard time believing this is one of the strongest materials on the planet. That’s because of the way that it is packed together, that fundamentally alters the structure of graphene.

If graphene had only one of its many superlative traits, it would be already the subject of intense research for many potential use cases. Being remarkable in so many ways, graphene has inspired scientists to think of a wide range of uses for this material, in fields as varied as consumer tech and environmental science.

Next to its astonishing electrical properties, graphene is also highly transparent and flexible. Ideal properties to use it for portable electronics. Using graphene, smartphones and tablets could become much more durable, perhaps could even be folded like paper.

Thanks to its superior properties, Graphene could be also used for applications like solar cells, semiconducters and water filtrations.

Graphene’s tight atomic bonds make it impassable for nearly all gasses and liquids. Surprisingly, water molecules are an exception. Because water can pass through graphene while most other gasses and liquids cannot, graphene could be an extraordinary tool for filtration. And it could be also very helpful in purifying water of toxins. In a study published by The Royal Society of Chemistry, researchers showed that oxidized graphene could even pull in radioactive materials such as uranium and plutonium present in water, leaving the liquid free of contaminants. The implications of this study are extensive. Many of the most devastating environmental catastrophes in history, including nuclear waste and chemical runoff, could be cleaned from water sources thanks to graphene.

As overpopulation continues to be one of the world’s most pressing environmental concerns, maintaining clean water supplies will only become more important. Indeed, water scarcity afflicts more than a billion people worldwide, a number that will only continue to rise given current trends. Graphene filters have immense potential to improve water purification, increasing the amount of fresh water available. Lockheed Martin recently developed a graphene filter called “Perforene,” and the company claims that this filter could revolutionize the desalination process as it is a hundred times more energy efficient as conventional osmosis processes.

3D printing with graphene: Challenges ahead

If Graphene could be 3d printed it would revolutionize many applications and the 3d printing industry itself. To turn this into a reality it has to be possible to produce the material in large quantities. But so far it has been problematic to 3d print something from graphene that is bigger than the size of a credit card as it is too expensive and hard to produce at a larger scale.

Once you stack multiple layers of graphene one onto each other (like you do with 3d printing), you get graphite with relatively weak properties. This means 3D printing pure graphene is impossible. A 3D structure is only possible when graphene is mixed with a binder.

Coming closer to the appealing vision of 3d printing graphene at a larger scale, MIT researchers studied how graphene would behave in the graphene simulation experiment.

The researchers simulated the procedure of 3D printing with graphene using an object that could be 3D printed in a common material and in bigger scale than graphene. The atomic structure of graphene in macro-scale was mimicked. They implemented it into the creation of this Gyroid shape.

As explained above, graphene is made of carbon atoms arranged in a hexagonal structure. This arrangement of carbon hexagons, is formed in a repeated pattern so that only one single hexagon is needed to multiply it in the 2D space in order to generate as large a piece of the graphene lattice as you wish. So, the reason why they chose this 3D printed gyroid shape is because of its repeated lattice and its similarity to the repeated geometry of graphene.

For the experiment itself, the researchers 3D printed sponge-like shapes, made out of plastic. The team produced a stable, strong structure that resembles corals and microscopic creatures known as diatoms, by using a combination of heat and pressure to compress small flakes of graphene.

They submitted them under various compression tests to check how much they can handle before they would crumble. As we see in the picture below, two gyroids with different wall thickness were subjected to this test.

As we can see from the following animated image, the gyroid with thinner walls crumbles more gradually, while the gyroid with thicker walls lasts longer under pressure and breaks very abruptly. This happens because the wall thickness of the gyroid on the right absorbs more tension and is been released in the end into a sudden explosion.

The result of these tests enabled the researchers to digitally simulate how a gyroid made from graphene would perform under such stresses, as explained by lead author Buehler, “You can replace the material itself with anything. The geometry is the dominant factor. It’s something that has the potential to transfer to many things.”

The geometry structure of the gyroid could be used when building large structures, like a concrete bridge; it would even provide good insulation for the bridge, due to the amount of enclosed airspace. Since the gyroid is full of tiny pore spaces, it could even be used in some filtration systems.

There are voices that claim that graphene holds the key to engineering and 3D printing. There is no doubt that it has the potential to disrupt the 3d printing industry in many ways, but the scientific community still has a long way to go. Though, one thing that the example of graphene can teach us, is that in order to think at big scales, you have first to think at very small scales.

The Circular Economy Model (Part 1): Nature as a Role Model